Hope for the Homosexual

I read an article this morning in our local newspaper about an interview with Pope Francis aboard the papal aircraft. When asked about homosexuals he stated, "If someone is gay and searches for the Lord and has good will, who am I to judge." It is mind-boggling how in the past 20-30 years homosexuality has become a normal and accepted life-style. Few see it as a sin issue. The recent Supreme Court action has basically declared homosexuality to be a moral good in need of constitutional protection. It would seem that few are willing to stand up and declare that this behavior is wrong.

We live in a day when sin, condemnation, and judgment are words so vile and hateful that they should never be uttered. The PCUSA recently rejected the Keith and Kristyn Getty song, "In Christ Alone" from its new hymnal because of the words in the third stanza, "Till on the cross as Jesus died, the the wrath of God was satisfied." They wanted to replace the words with, "The love of God was magnified." The word wrath is too offensive for this denomination to utter. When you live in a society where sin and judgement does not exist and everyone does that which is right in their own eyes all of the fences are removed. Why not pedophilia? Why not incest? Why not kill fourth trimester children (that would be after birth)?

Homosexuality is clearly an issue of sin, but sometimes the church has been so zealous in declaring the sinfulness of homosexuality, they have forgotten the Gospel. Through the Gospel of Christ the worst of sinners have been transformed--murderers, adulterers, robbers, drunkards, and yes, homosexuals. The Gospel is good news! It holds out forgiveness, reconciliation, and hope. Our duty as the people of God is to look upon sinners with compassion and mercy. We must never look upon those trapped in sin as if we have never been in their condition. Sin has corrupted every human being upon the earth. It manifests itself in endless ways. Homosexuality is just one expression of the depravity of the human heart.

In one sense I have to agree with Pope Francis. "Who am I to judge." Christ is the ultimate Judge before whom all men shall stand. On the other hand, the Bible is a clear revelation of the nature of sin and the condition of the human heart. God commands that all men forsake their sin and fall before the rule and reign of Jesus Christ. We must trust His perfect atoning sacrifice upon the cross where He bore the sins of His people and suffered the condemnation they deserved. We must receive His perfect righteousness to meet the perfect demands of the Law. But there is glorious hope. The homosexual can be changed. By God's Spirit he can forsake his sin and experience the love of Christ which is beyond compare. He can be restored to a right relationship with his Creator. The wrath of God can be removed. "That if you confess with your mouth Jesus as Lord, and believe in your heart that God raised Him from the dead, you will be saved" (Romans 10:9).
Posted by Dale Crawford at 2:37 PM No comments:

Count it All Joy 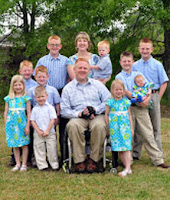 The following is from Pastor Robert Shelby, one of our pastors at Trinity Baptist Church. July 3, 2013 marks the one year anniversary of his paralyzing injury. He shares how he has followed the Biblical mandate, "Consider it all joy, my brethren, when you encounter various trials (James 1:2).