The Cure for Spiritual Doubts and Fears

A sad malady that is suffered by many Christians is a lack of the assurance of faith. Doubts and fears continually gnaw at their hearts. I recently purchased a book published by Solid Ground Christian Books that is a refreshing balm to our spiritual life. It was written in 1882 by Thomas Moor and titled, “Counsels and Thoughts for the Spiritual Life of Believers.” Moor writes, “One of the greatest hindrances to the spiritual life of the child of God, is a state of continued doubt about his salvation. Such a state has a tendency to weaken the soul for everything good, and to lay it more open to the ensnaring influences of its spiritual enemies. It prevents the soul laying hold on eternal life, and laying claim to the promises of grace for time of need, and robs it of the enjoyment of all those spiritual blessings in Christ Jesus, which are its rightful portion.”

And what remedy does Moor offer to the doubting soul? He writes, “It is essential for your spiritual comfort, that the certainty of your salvation should be with you a matter of abiding and uninterrupted consciousness in mind and heart. Many things will tend to surround this consciousness with clouds of darkness and doubt, and will succeed in doing so, unless you are firmly build upon the true foundation—Christ crucified.” As Christians we must continually have the cross of Christ before our eyes. The words of our Savior, “It is finished” assures us that all has been accomplished. Jesus carried our sins to the cross and we bear them no more. Moor continues, “Look upon your salvation as a thing accomplished once and forever; and live in accordance with this fact.”

A common source of our doubting is when we turn our eyes inward to our remaining corruption and conclude we are unfit for eternal life. We once again place ourselves under the yoke of the Law and find ourselves condemned. Moor reminds us, “Remember that you have altogether done with the law as a covenant of works. You are now dealt with according to the covenant of grace, in which covenant you forever abide. No failure can remove you from that; for in its arrangement every failure, every sin to the end of your life, is taken into account, and fully arranged for, and completely put away by the death of Christ. By His death you are forever delivered.” The solution for the defeat of our doubts and fears is to look to Christ, the author and finisher of our faith. He has fully accomplished our redemption. He alone is sufficient. We rest in Him who will never fail to accomplish the salvation of those whom the Father has given Him.
Posted by Dale Crawford at 2:13 PM No comments:

Women in Ministry, The Battle Rages On 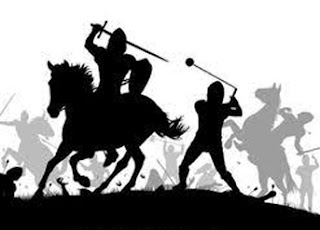 The year was 1979. For years the Southern Baptist Convention had fallen sway to the curse of liberalism. It was finally time for valiant conservatives to bring the battle for the Bible to the front lines. W.A. Criswell, pastor of the First Baptist Church of Dallas was one of the early warriors along with Adrian Rogers, Sam Cathey and others. Adrian Rogers, pastor of Bellevue Baptist Church,  was elected as SBC president. That began the long, hard-fought battle for the innerancy of Scripture, and throughout the 1980's annual conventions were often hot battlegrounds. Finally, conservatism won the day. Many of these earlier warriors are gone, but the battle for truth is never over. Satan does not rest and error is always ready to raise its ugly head. Sadly, many in the SBC have lost their willingness to stay on the front line. They assume that since the battle for inerrancy is over we can lay down our weapons and rest. But the war is far from complete.

I've been encouraged to see the great increase of those in our Convention who embrace what we affectionately term, "The Doctrines of Grace." It has been a refreshing return to the beliefs of our Founders. Although it is a neo-Calvinism, it shows progress nonetheless. This battle is still in its infancy.

There are endless other battles that are raging. The Woke movement and an unbiblical effort towards social justice is inflicting damage upon many of our churches. Other churches have been distracted by endless non-essential debates as frivolous as whether or not masks should be worn. In such times we are easily distracted and the Gospel takes a serious hit. Many are terrified by the "cancel" culture.

There is another battle that has been brewing for some time, but now another serious volley of flaming arrows has been unleashed. Last week, Saddleback Community Church conducted an ordination service. Ordination services are usually a time of joy, as God's call upon a man's life as a shepherd of His people is affirmed by the church through the laying on of hands by the elders. But this wasn't that kind of ordination service. They "ordained" three woman to the pastoral ministry. We thought this battle was decided by the generation that fought the battle to regain the Bible, but again, such battles are never really over. We've seen this coming for a while, but it remains to be seen what the long-term impact will be. Many, including our own church are watching closely.

The right action is to immediately disfellowship with this church, but will our leaders be willing to walk away from one of the largest churches in the Convention that is pastored by a man with the influence of Rick Warren? This church no longer holds to the Baptist Faith and Message. Article VI states regarding the church: "Its scriptural officers are pastors and deacons. While both men and women are gifted for service in the church, the office of pastor is limited to men as qualified by Scripture." A local church cannot redefine the nature of the office and those who are qualified to fill it. SBC Executive Committee President Ronnie Floyd said, "Circumstances like these may be complex, but we must work diligently to understand them and to achieve clarity. Ultimately, Southern Baptists will always stand upon the authority of the Scripture." If this is true, then Saddleback must be admonished to immediately recant this unbiblical ordination service. Each of the four candidates for SBC president have spoken against the action of Saddleback. While Albert Mohler stands opposed to the ordination his statement needs clarification. He states, "The office of pastor is limited to men as authorized by Scripture, and this means both the teaching office and the function of preaching before the congregation." This is a true statement, but the office of pastor is not limited to that of a "teaching office" and "preaching before the congregation." The office is also an office of administration, of leadership and oversight, of shepherding God's people, of watching over souls. Saddleback may claim these ladies were not ordained to the preaching ministry, but the pastoral office is much more. A female does not meet the Biblical qualifications for this office and must not be set apart for it through ordination.

Mike Stone, pastor of Emmanuel Baptist Church, stated our proper response most clearly. "Churches which ordain or call female pastors are not acting in friendly cooperation with the SBC and should either change, withdraw or be subject to our disfellowshipping processes."

This is one battle that is not difficult to evaluate. The only difficulty will be whether or not we are ready to engage the battle and hold the ground on Biblical truth. As always, as Christians we must be gracious and always loving, but never willing to negotiate on matters of truth.