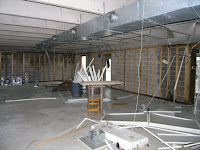 God demonstrated once again His sovereignty through the storm. He again proved Himself mighty in coming to the aid of His people. And He demonstrated again His goodness in giving good gifts to those He loves. Soli Deo gloria!
Posted by Dale Crawford at 6:58 AM